Ingushetia, or Ingush Republic, or Ghalghai Mokh (Ghalghaiche), is the Long Lost Home of Daria's Grandmother Fatima Akhrieva, a land of immense beauty and harrowing tragedy, of fascinating history and unique traditions. It is located in the south of Russia, in the breathtaking Caucasus Mountains.

In November 2015, Daria Kulesh performed The Moon and the Pilot, a song based on her Ingush Grandmother’s stories, live on BBC World Service. Described by Mike Harding as “one of the most beautiful new songs of the last 10 years”, it prompted hundreds of people to contact Daria to express their gratitude for the song and for speaking out about the events of February 1944, when the Ingush and the Chechens were brutally deported from their homes on the orders of dictator Joseph Stalin. Any mention of Ingushetia and the Ingush was erased from history books, dictionaries, encyclopedias. Despite the deportees being allowed to return in 1957 and their national identity restored (the Ingush Republic was formed 25 years ago), the pain lingers and justice hasn’t been fully served to this day. 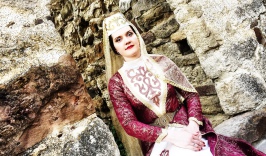 The song has made Moscow-born Daria known in Ingushetia and in August 2016 she has been invited to visit her Grandmother’s lost homeland for the first time. During her visit, she has appeared on Ingush national TV & radio and performed public concerts. Daria has also visited the breathtakingly beautiful mountains and their unique tower-studded fortified villages, including her Grandmother’s ancestral village of Fourtoug. She has met the President of Ingushetia, the Minister of Culture and other dignitaries as well as local musicians, dancers, poets, historians, actors, artists who have all shared their knowledge, passion and inspiration. She has also been reunited with relatives. Daria's unique memories and experiences are reflected in her album Long Lost Home, released on 23 February 2017.